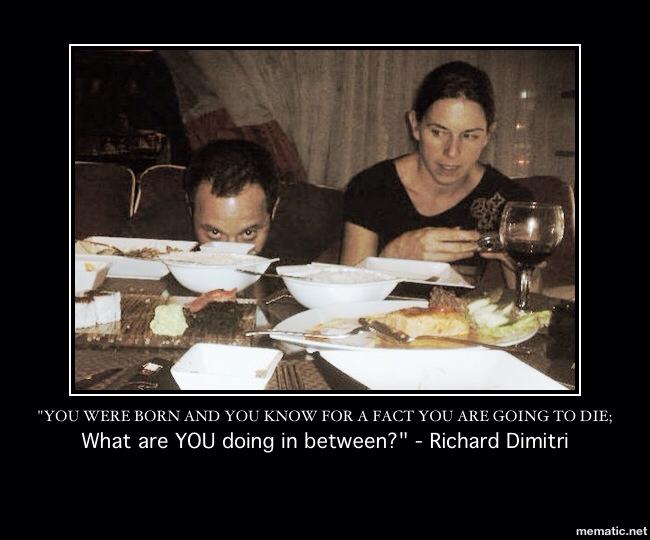 What if instead of bombarding people with ads on TV of countless pharmaceuticals, fast and processed foods, they bombarded us with ads on the health benefits of free range, organic meats and produce as well as how a healthy lifestyle avoids the need for such medicines in the first place?

What if the media were to promote reading, learning, growing and evolving instead of telling us what to wear, what to drive, what to think, what's successful, what's 'in'?

What if people were as interested in their neighbor's lives as they were on the Royal's or some movie star couple?

What if we acknowledged and greeted, even if just with a nod or smile, everyone we encountered?

What if we took the time, every single time (unless it was detrimental to our own lives) to lend a helping hand every time we saw someone in any kind of general daily struggle from holding a door to helping with groceries to picking up something they dropped to letting them have your seat on a bus regardless of their age or gender, etc.)?

What if every single time every single person saw litter anyhwere, they simply took the time to pick it up and toss it in the nearest garbage or keep it until one was found?

What if instead of soda, candy bar and chips; vending machines in the majority of hospitals, schools, gyms and arenas were filled with organic fruit and vegetable juices, nuts, seeds and health bars?

What if the hemp plant was legalized world wide and education was provided on how to industrialize it allowing third world countries & giving the poor the means to make their own food, clothes, fuel, over 2000 textiles, etc.?

What if by legalizing it, we could now make paper from it therefore saving the rainforests and chopping of trees? What about the fact that fuel can be made from it? What if we indeed made eco friendly and inexpensive fuel from hemp instead of using oil?

What if every single person on earth holding any kind of grudge against anyone at all from minor to major regardless, forgave and move on?

What if every human being on earth could see themselves in another and could actually grasp beyond mere comprehension; but actually doing some shit about the fact that we are all connected whether we like it or not, we are all interconnected regardless of religion, gender or nationality, sexual orientation etc. would violence still be as prevalent within our species?

What if instead of making cars most people can't afford; and even those that can, can rarely ever use at their peak due to traffic laws and the like -what if they only made cars that were safe, secure, reliable and didn't go beyond the highest of allowed speed limits? (faster cars can be purchased or leased and only driven at tracks or certain allocated areas in order to be able to "kick it" and enjoy them as they were meant to without risk - as it were.)

What if the tobacco and alcohol industries weren't 2 of the biggest sponsors on the "WAR ON DRUGS?"

What if humanity ceased to make, distribute, market and sell cigarettes and people had to grow their own tobacco to make and roll their own if they wanted to smoke?

What if more money was spent on education instead of privately owned prison systems?

What if all drugs were legalized and regulated and the 5+ million per year spent on the war on drugs was allocated to murder/rape/pedophilia crimes, would it reduce the 800,000+ incarcerated per year for marijuana and increase the incarcerations of rapists, murderers and pedophiles? Would there not be more money for investigating much harder felonies? Or instead, what if the 5 million a year was used for education and schools?

What if more was spent on health and fitness education, would obesity and malnutrition be as high?

What if God weren't looked upon by most as judge, jury and executioner and instead, nothing more or less than the energy of pure and simple unconditional Love - without judgement, without guilt, without oppression, without character or personality or gender?

What if humanity collectively accepted a worldwide human law passed that no one on earth can have more than 1 child for a determined number of years in order to greatly reduce the growing and threatening 8+ billion population mark while maintaining our species for the greater good of our species and the world we live on and in?

What if a breathalyzer were to be installed in all cars as a means of starting the ignition/engine instead of a key or remote and if the breath is over the legal limit of driving, the car simply doesn't start? Same thing with the seat belt.... no seat belt, car don't start. How many lives would that potentially save from drinking and driving?

What if every single human being on earth who owns a home worth 1 million $ or more were to sell their home, move to a different neighborhood, purchased a 400 thousand $ home instead and used the balance to help all the tsunami/earthquake/flood victims worldwide?

What if every single person in the world who owns a watch that is worth over $1000 sold their watches, purchased a $100 watch instead and used the balance to make sure that a child somewhere doesn't starve to death?

What if we only did half of even one third of all of that?