Damned if you do or don’t. 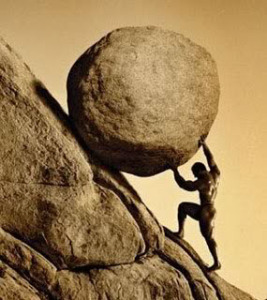 I don't know about other self defense instructors out there but for me, this has been and is one hell of a tough job.  Maybe I'm sensitive, I don't know, but dealing with the violence and its trail of victims, dealing with the politics of the industries and topping it off with the feeling that nothing you do or have ever done has even made a dent in the world, regardless of the testimonials or the number of friends and peers who tell you what a great and fantastic job you are doing; it still manages to leave this dense heaviness in the middle of my chest enough for me to battle the daily decision of leaving it altogether once and for all.

I wrestled with the idea of quitting for nearly 5 years. I tried leaving it all back in early 2012 when my son was born.  Though he was one of the main reasons factoring into several others at the time, that anvil in the middle of my chest was most certainly a decisive factor. I managed to somewhat stay away for 3 years while dabbling mainly in the sport side of the martial arts which was truly a breathe of fresh air to deal with people who simply wanted to get healthier and stronger in their lifestyles.

During those 3 years I decided to try various jobs and since I've never really had a real job by societies standards since I worked at a paint store in my late teens, I had no idea how to do a job interview, so needless to say, I was too "intense" for the first few and didn't get the job.  Once I learned the game some, I started getting work and I went from delivering pizza to working at a video shop to working for Parks Canada at a summer camp ground.

Finding it difficult to navigate from unfulfilling job to unfulfilling job as much as I enjoyed them during the short terms and worked with great people all around, I literally began hitting a state of depression and losing a monumental part of who I was and am, I had to go back to do what I do best, what I was and am literally born to do; and in October of 2014 I made the decision to return to teaching.

The job isn't 9 to 5 either, for me anyway, it's 24/7. I can't just 'shut it off', it's much to much a part of who I am and so that heaviness returned with it.  I have since dealt with and plunged right back into the world of violence, a dark world, one that left me cynical and unfortunately somewhat jaded, I can't deny that.

Now I don't know if you believe in coincidence or that shit happens for a reason, but every single time I've come so really close to the decision of leaving it all behind for good, I receive an email or a phone call from someone who's life I have changed. Not saved; but changed and inspired.

Today was no different. I received a message from a Facebook friend I haven't directly really communicated with in years.  He asked me to call him as what he had to say he felt he needed to say in person.  I called him up and he confided in me that he is unfortunately and sadly, in his final days as cancer has taken its toll after a long and hard battle.  He is at peace and had wanted to just thank me for both my work and sharing my personal experiences with you good folk out there over the years, as I have been an inspiration and he felt I should know that I, amongst many others of course, were one of those who touched his life.

Needless to say, I am not quitting today and probably never will though it will be a daily battle with me, I know this. And to everyone out there I say, you never know whose lives you touch with yours, simply by the sharing of your own experiences.