At what level of ‘Self Defense’ will you settle? 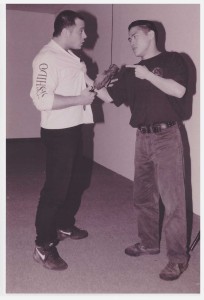 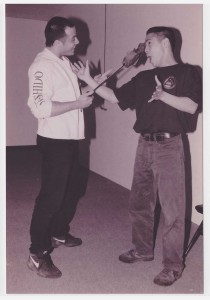 What do you train for? Speaking of course, from a self defense, personal protection and self preservation perspective.  I ask this because I notice people train differently and seemingly for differing kinds of circumstances and situational predicaments I can only assume are based on their lifestyles and concerns within.

Some focus mainly on the physical aspects, which that alone encompases such a wide array of possibilities from dealing with the environment and clothing one is wearing to the actual physical responses used, it creates it's own set of questions for example; what, in one's seemingly normal lifestyle, would make them dedicate a large percentage of their training time perfecting their punching skills?

Now this is not a judgment call at all, it could be that the individual in question happens to be a gifted boxer and the level of violence they have been exposed to in their lifetime consists of basic road rage or alcohol based incidents and that their punching skills have come in handy on more than one occasion under these circumstances and therefor focuses their personal defense training mainly as such.

Compare that to the individual who is seemingly obsessed with firearms being the first and foremost training method of self protection they engage in who maybe lives in a more violent neighborhood and has perhaps lost an acquaintance or friend in gang related issues.

Then there are those who spend a large portion of their training on the mental side, training the mind as it were, to be the primary weapon.  The mental aspect is just as extensive and diversified as the physical ranging from working verbal defusing skills to tone down the average aggressor and managing one's fear to having themselves waterboarded in case captured and tortured by their perceived enemas. Enemies. I meant 'enemies'.

But then there are those of course, who are overtly paranoid and are out there literally training for the Zombie Terrorist Apocalypse while they are living in first world white suburbia.

The question here is, without judgment but simply out of curiosity; what are you training for? And if you have a family, are they equally as trained? To paraphrase the immortal Brandon Lee, at what level of self defense will you settle?

Previous PostTruth: Strictly for those than can cope
Next PostDamned if you do or don't.